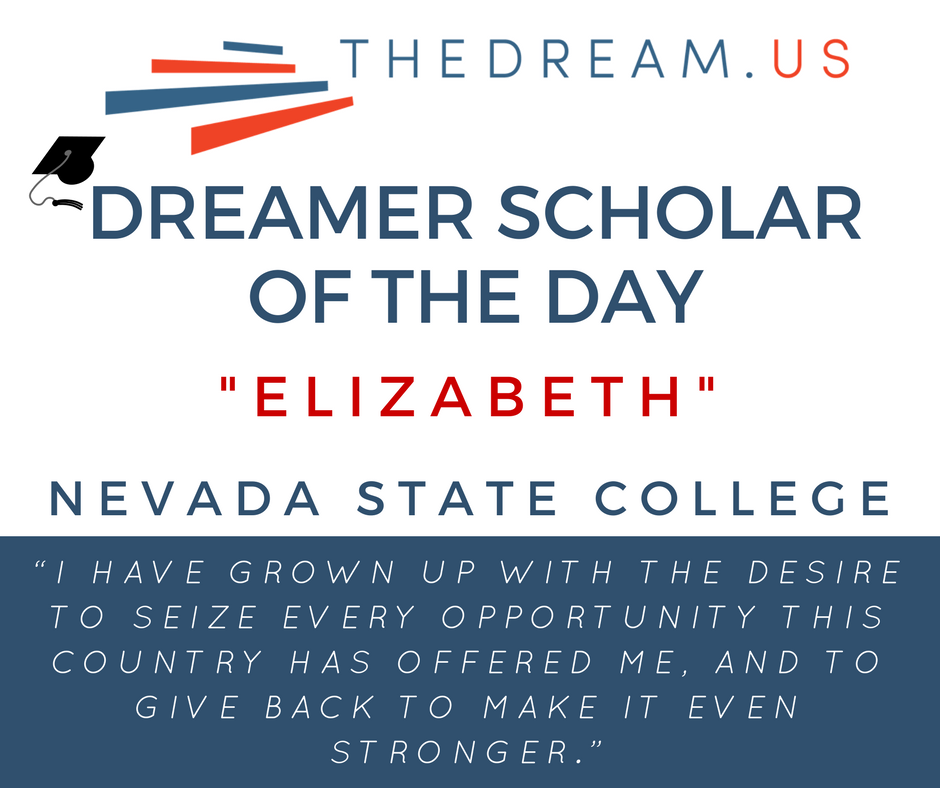 It feels funny sharing my story because I’ve always flown under the radar when it comes to discussing my immigration status. I’ve never felt like anyone cared about my story, but it feels worth sharing in this scary time for DREAMers. DACA has given me a sense of safety – the security I needed to chase my dream in this country – and TheDream.US scholarship has provided me with the financial resources necessary to pursue a college education. Both of these forms of assistance make me feel safe and equal to my peers – like I have an equal shot at success. I’m not sure what I would do if this sense of security was fully taken away from me. No one deserves to live in fear. And everyone deserves the chance at an education. As a child, I remember living with my grandmother in Mexico. My mother would work all day, beginning early in the morning, and so I would not see her until very late at night, if at all. My father had already moved to the United States in pursuit of his American Dream. It was a lonely start to life, but my grandmother and I were very close. When I was seven years old, I moved to the United States. My father was already working in construction at the time. My mother and I would go to the streets and to restaurants to sell necklaces to make money, and my oldest sister would stay home to take care of my younger siblings. There are six children in my family in total: five girls and one boy. When I was eleven years old, my father was diagnosed with and shortly after died from sarcoma cancer. My life has never been the same. The seven of us had to move in with my aunt, and all live in one room because we could no longer afford to stay where we were living at the time with the help of my father’s construction pay. It was a really hard time for all of us, and required a lot of sacrifice. For the most part, I didn’t feel different from my friends and peers because, for most of my childhood, I did not know I was undocumented. Elementary school was difficult because I did not understand the language, but I made friends who spoke Spanish as I got older, particularly in middle school. We lived in a community where there was a large amount of Spanish speakers and students, which was helpful for my adjustment. However, I found out I was undocumented during my sophomore year of high school when I began researching scholarship options for college admission. At this time, I started to feel different, like maybe I don’t belong in this country after all. This didn’t deter me from getting involved in my community though. I’ve volunteered with the American Red Cross since freshman year of high school and I’m also involved with the Student
Organization of Latinos, Mu Alpha Theta Math Club, and a non-profit leadership organization called Leaders in Training. I’ve also completed three different internships at Veteran’s Home, ATI Physical Therapy, and Sunrise Hospital. As a member of the Nevada State College class of 2021, I hope to graduate with a nursing degree, and use the healthcare experience I’ve gained through my internships and will gain through my coursework to continue to give back and help out disadvantaged populations of people. In addition to pursuing a nursing career, I plan to give back to my community by helping undocumented students and first-generation students apply to and attend college. I want to inspire these kids to not only make it a goal to go to college, but to graduate from college and pursue the career track of their dreams, because everyone deserves that. I plan to continue to volunteer with Leaders in Training because this organization has equipped me with the skills and knowledge necessary to be a leader and inspire others to work hard and change their lives. Even though the last election cycle has ushered in a fearful time for undocumented people, there is no doubt in my mind that America is my home. In fact, it is the only one I’ve ever known and I have grown up with the desire to seize every opportunity this country has offered me, and to give back to make it even stronger.