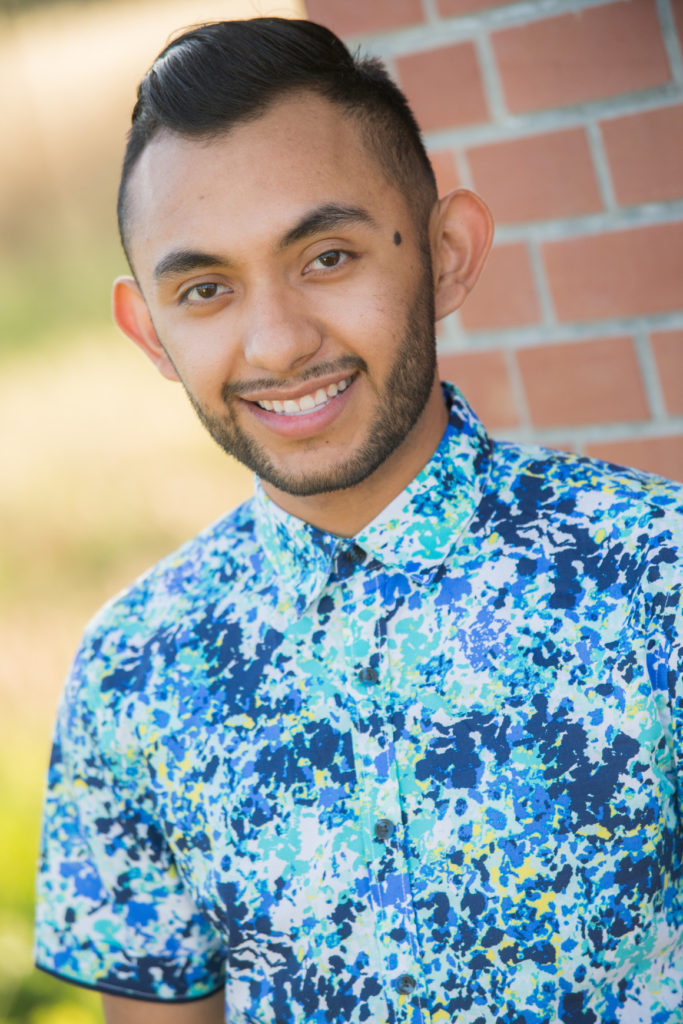 Alone on the stage, alternatively in light and shadow, Kevin Gaytan performs a modern dance piece that he choreographed while at San José City College in California. The music is haunting, his movements are precise – his message heavy with significance to his own life.

Kevin, 21, is a DREAMer on his way to earning a Bachelor’s Degree at San José State University, with financial assistance from TheDream.US.

At age seven, Kevin flew from Zacatecas, Mexico to Palo Alto, California with his mother. She had a temporary permit to work in the United States and wanted to provide for her older daughter’s education back in Mexico. Mother and son became undocumented after the permit expired.

Kevin says his mother was “always working – cleaning houses, janitorial jobs, late at night, cleaning offices, stuff like that.” He fully understood his status after questioning her about why she only does this kind of job, and from his freshman year of high school, he has worked to help out. Recalling the experience of being a janitor at a local mall, he says, “I [remember] seeing my friends coming to the mall, and me cleaning around them.” He goes on, “I did feel that embarrassment of not being equal to them.”

His first two years of high school were “rough.” He says, “I didn’t necessarily try to be successful…because I knew where I was headed.” Observing his mother, and other undocumented students that had dropped out of school, toiling in blue collar jobs made him aware of his future prospects. “For me, I felt like that was my route and what I was supposed to do, given the fact that I didn’t have any opportunity or access to…resources [for] a higher education,” Kevin explains. Fortunately, Kevin met a counselor through the program CAL-SOAP and together, they began making real plans for college given his status as an AB540 student and DACA recipient.

Graduating from Yerba Buena High School with a 4.0 GPA in 2012, a now determined and focused Kevin immediately began coursework at San José City College and eventually earned two Associate’s Degrees. At the community college, Kevin found a support group – a foundation to believe in himself and keep going. “There were counselors just like myself…Mexican-Americans [that] held Master’s Degrees and PhD degrees, so it gives you that inspiration…there is someone that looks like me and what I could be,” he says.

Having only each other, he and his mom became partners in securing their livelihood and working towards their goals. They had been putting aside part of her salary so that he could transfer to a 4-year university. A much needed boost came in his email one night as he was doing homework – a scholarship opportunity from TheDream.US. With only two weeks until the deadline, Kevin worked feverishly to complete his application, while his mother worried about all the time he was spending on the computer. He did not tell her until the joyous moment when he learned that he was awarded. He recalls:

It was very emotional for both of us…I opened the email…and I started [translating] it word for word. I could see her eyes starting to tear up. She started crying, and I let her know that this was something that validates what she has done. It validates that…she created a person [who] is determined. She created a person that is going to continue [my education], and I have the help to do it now.

When asked what advice he offers to other DREAMers, Kevin recommends formulating and sticking to an academic plan in order to graduate on time. He affirms, “It’s about knowing what you’re going to do, how you’re going to do it, and actually doing it, taking action…and being responsible with your education.”

Kevin is double majoring in Sociology and Dance at San José State and feels that “preparation is key to everything that you do.” He hopes to be a teacher in both respects, and be a mentor and role model for others, just like the supportive base that he had. “A lot of the times, all you need is someone to…let you know that you are worth it, and you can make it,” he declares.

With renewed hope and resolve, Kevin focuses on modern dance as an artistic way of bringing awareness to the issues that he’s passionate about, such as identities in culture, gender, and sexuality. He concludes, “With dance, I’ve found a different voice. I found different ways to make statements.”