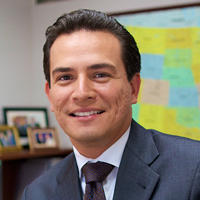 As Senior Director of Government Affairs for PEPSICO, Lupe De La Cruz manages political and public policy activities for eight states in the western region of the United States. In its global portfolio of food and beverage brands, PepsiCo has 22 different brands that generate more than $1 billion each in annual retail sales. With net revenues of over $65 billion, PepsiCo’s main businesses also make hundreds of other enjoyable foods and beverages that are respected household names throughout the world.
Lupe represents PEPSICO’s diverse convenient food and beverages portfolio with policy makers and community leaders and directs PEPSICO’s community engagement in those states. With a cross divisional team, Lupe supports PEPSICO’s national initiatives in the Latino community. He joined PEPSICO in 2005 and is most proud of his role in fostering relationships with the communities he works in.
Lupe’s interest in government affairs began working on several political campaigns and grassroots mobilization; a product of following his father to many political and campaign rallies as a youth. His passion for public policy issues was cemented while working in the office of Congressman Esteban E. Torres and later as Advocacy Director of the AARP California State office. While at AARP, with a cadre of volunteer activist and dedicated professional staff, he developed legislative strategies that led to the enactment of over a dozen consumer protection bills ranging in policy areas from healthcare and financial privacy to home owner protections and long-term care.
Originally from the Greater Los Angeles area, Lupe graduated from UCLA with a degree in Political Science. As an undergraduate he served as a reserve deputy with the County of Los Angeles Juvenile Probation Department. He ran a literacy program in the juvenile probation camps and later managed caseloads in the Gang Alternative and Prevention Program.
Currently, Lupe serves on the Board of Directors of LA Plaza de Cultura y Artes, which celebrates and cultivates an appreciation for the enduring and evolving influence of Mexican and Mexican-American culture, with a specific focus upon the unique Mexican-American experience in Los Angeles and Southern California. He also serves on the Advisory Boards of the California Latino Caucus Institute, the National Council of La Raza and the Congressional Hispanic Caucus Institute. He served six years on the Board of the Chicano Latino Youth Leadership Conference, which sends 120 high school students to Sacramento for a week long of intensive leadership training. He resides with his wife, Yadira Tovar De La Cruz, son, Lupito, and daughter, Elizabeth, in Frisco, Texas.