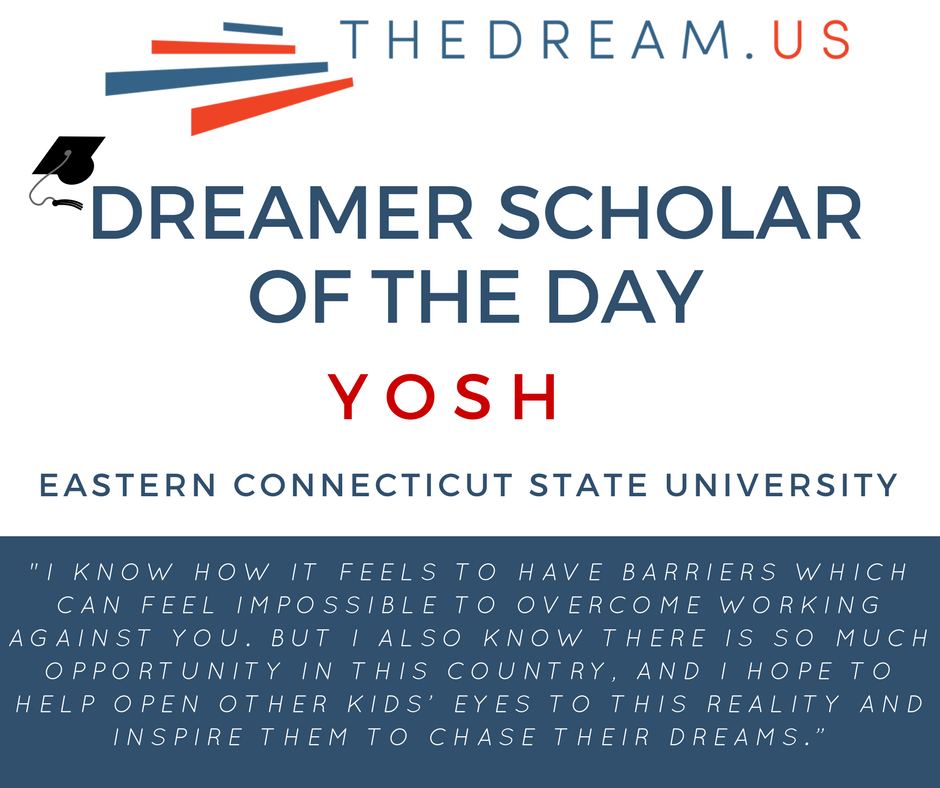 Growing up in Atlanta, and especially in high school, I was always eager to become involved in as many activities as I possibly could. I always would laugh when people would ask me what extra-curricular activities I was involved in, because the better question was what activities and programs I was not involved in. My motivations for getting involved in these kinds of organizations have stemmed from wanting to seize opportunities, to learn new things, and to help others. Through TheDream.US scholarship, I plan to continue to expand on this desire to help others at Eastern Connecticut State University. With my education, my ultimate goal is to open an organization to aid low-income youth and undocumented youth. I know how it feels to have barriers which can feel impossible to overcome working against you. But I also know there is so much opportunity in this country, and I hope to help open other kids’eyes to this reality and inspire them to chase their dreams. America is the only home I’ve known. I grew up speaking English, singing the national anthem with pride, reciting the Pledge of Allegiance in school, and learning everything there was to know about what it means to be an American. When I was six years old and living in Mexico, my mom packed up our things and told me we were moving to the United States – to escape from a man I refuse to refer to as my father. He used to hit my mom, and she finally decided no more. So we moved to Atlanta for a new start, and I am so glad we did. When I started school here in America, I felt at home immediately. Everyone was so welcoming to me. I grew up in a mostly Caucasian neighborhood, so I guess you could say I was whitewashed in many ways. It was rare when I would come across another immigrant, and even rarer that I would see other Spanish or Hispanic kids. I even developed a southern, Georgian accent! There are so many DREAMers out there who, like me, have a dream of going to college. There are also, unfortunately, a lot of non-believers out there, people who don’t think highly of us, and who don’t recognize how much potential we have to make a difference in our communities and contribute to the country we call home. I hope this changes. In the meantime, I would say to other DREAMers: Never doubt yourself; think positive; go for it. Only focus on what you can control and do the best you can. As a DACA recipient, I have been afforded the ability to work and drive in this country. Both privileges have allowed me to support my family, both financially and by being able to drive my family members to where they need to be. Ending DACA and refusing to fix DREAMers’ status
in Congress would feel like someone was snatching the biggest dream come true of my life and for many other DACA recipients. Even in this politically turbulent time, though, I try to focus on the good. I love to learn new things, and I love this country. The reality is, we DREAMers don’t know what the future holds for us. The one thing we can control is the work we put in, and I plan to continue to work hard as a college student and scholarship recipient in this country, which I am incredibly lucky to call my home.