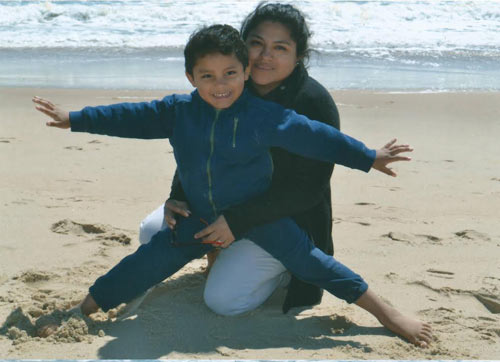 Family means everything to DREAMer Zury Gonzalez-Amaro. She came to the U.S from Oaxaca, Mexico with her mother and siblings in 1993, when she was 10 years old. They made the journey to reunite with her father, who was already living in New Jersey.

Fully aware of her status and inability to attend college, Zury attended East Brunswick Vocational Technical High School in hopes of preparing herself for the job market. She says, “they were supposed to train us…prepare us for a job in the future, because college was not in my plans, because of the situation I was in.”

“When I was in high school, I had good grades,” she says. Because she was such a good student, her teachers encouraged her to apply for scholarships. But she already knew the outcome: “I was not going to get it because they want a social [security number].” However, with her enrollment paperwork from high school, she was able get a job at CVS during her senior year. She ended up staying there for the next eight years and then left in 2010 to focus on starting her own family.

Zury, now 32, is devoted to her husband and their 4-year-old son, who has become the priority, mainly due to health issues from his birth. “I had a very rough pregnancy with my son,” she says. He had been continuously sick ever since, in and out of the hospital. However, during a conversation one day with her sister and brother-in-law, they asked what she wanted to do regarding her education. She told them, “I don’t know – I’m worried about my son – and I don’t know if I would have the money to pay for my school.” Her sister responded, “well, why don’t you apply for TheDream.US scholarship? It’s a scholarship for DREAMers.” Zury went home that night and researched all about it; committing herself to finally earning a degree.

Now, a TheDream.US scholar, she works diligently towards an Associate’s Degree in Business Administration at Mount Washington College online – a choice she made to have the flexibility to still be there for her son. However, the challenges are plenty. She explains: “[my classes] are from 11:00 to 3:30 [pm-am] three to four times a week. Sometimes I get so tired and I think I need to go to sleep now because it’s late, but when I go to bed, my mind is still running — I guess that’s the hardest thing. Waking up in the morning is another thing, because I have to be up when my son gets up.” Thus, time management has become an important skill for Zury. “If he’s playing with his toys in the living room, I could do a little bit of schoolwork during the day,” she says.

She finds unending support in friends, and especially her husband, who has always pushed her to follow her dreams and do more. “He always helps me. If he knows that I’m overwhelmed with everything, he always takes time out of his schedule be with our son, so that I’m able to have a little bit of time for myself. That’s been helpful.”

Amidst taking care of her family and studying, Zury also worries about her mom and siblings — her brother was deported back to Mexico in 2013. When he’s older, she wants her son to know that this was not easy for her, but “you have to make sacrifices. I want to graduate.” She wants other scholars to never give up:

Go for what you want. It’s not easy. But at the end, it’s beautiful and rewarding. You will feel happy, you will feel strong, and you feel that you are capable of doing anything you want to accomplish – whatever you want.”

With plans to go after what she wants in the corporate world someday, Zury is content at home right now. She says, “The only thing about my family is that we always have dinner together – that’s one of the rules that we made, regardless of whatever, we’re always here for dinner.”